You are here: Home / Uncategorized / Guilty or Innocent? 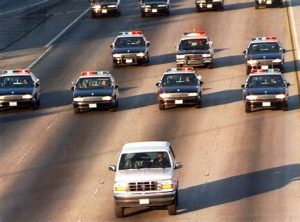 On this day in 1995, a verdict of “not guilty” was delivered in a court case watched or listened to by 140 million Americans.  The saga had played out before our eyes with a carnivalesque atmosphere as the longest trial in California history was conducted.

The journey all began on June 17, 1995 as we watched live news feeds from California.  CHP officers and other law enforcement agencies were chasing a white Ford Bronco driven by Al Cowlings.  Cowlings’ passenger was none other than O.J. Simpson who was allegedly suicidal and with a gun to his head.  From 7 p.m. to 8 p.m., a slow chase ensued while terms of surrender were negotiated.  Simpson was wanted for the June 12th murder of his ex-wife, Nicole Brown Simpson, and her friend, Ronald Goldman.

Orenthal James Simpson was known best as O.J. or The Juice.  He had an illustrious professional football career as a running back, playing most of his years with the Buffalo Bills but ending with the San Francisco 49ers.  He accomplished many things on the field and received numerous awards.  Now, he has the attention of everyone for far less applaudable reasons.

During the weeks that followed, the case had the world’s attention.  Three days after his arrest, Simpson pleaded “not guilty.”  This plea came in spite of the “mountain of evidence” that was found against him:

How could the prosecutors lose this proverbial “open and shut case?”  The reason is simple:  O.J. Simpson was able to afford what has been called the “Dream Team” of lawyers.  During the trial, they cast doubt on the most compelling pieces of evidence.

The media circus had also stirred up the issue of race.  A black man was being tried in a white court.  Polls showed that the majority of blacks believed O.J. to be innocent and the majority of whites, Hispanics, and Latinos believed he was guilty

After just four hours of deliberation, the jury returned a “not guilty” verdict to the dismay of Nicole and Ronald’s friends, family, and all the supporters they had gained.

Is O.J. Simpson guilty or innocent?  Did the jury get it right or wrong?  Did the defense attorneys create sufficient chaos or was there really discrepancies in the evidence?  The point of today’s devotional is not to retry the case or to assert my opinion. It is intended to point out a very important point.

Numbers 32:23 says, “… behold, ye have sinned against the LORD: and be sure your sin will find you out.”  And, Romans 2:16 reminds us “In the day when God shall judge the secrets of men by Jesus Christ according to my gospel.”

Nobody gets away with anything.  God knows whether or not Simpson was guilty.  Man’s laws and courts are not the ultimate and final judge.  One day, everyone will stand before God and the Books we be opened.  The Lord is the One to whom we all must answer.

Christians will stand at the Judgment Seat of Christ.  Our salvation is not in question.  Only our works are judged.  That which passes the test will receive reward.  Otherwise, we experience the loss of rewards. 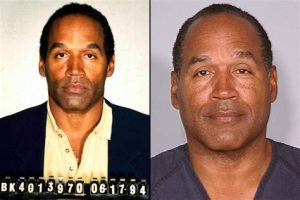 The unsaved will stand at the Great White Throne Judgment.  Their works will stand against them as well as their rejection of Jesus as Savior.  “Depart from Me, I never knew you,” will be the final words spoken to them.

Knowing what’s ahead in the future, we need to be making preparation now.  A life covered in the blood of Jesus is the only defense we will be able to make before God someday.  If we have that, then let’s protect the rewards reserved in Heaven by doing all that we do for the honor and glory of the Lord.