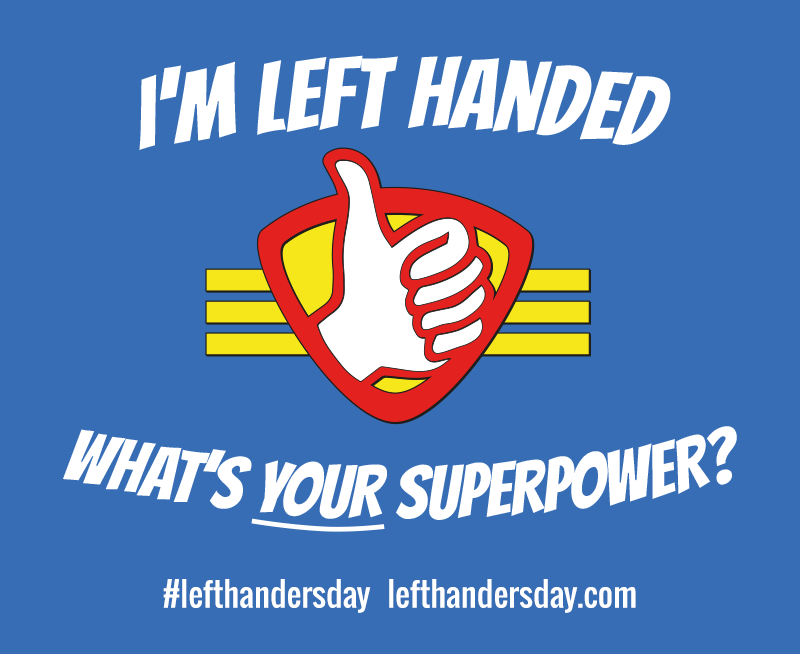 To all of you who are left-handed, this is your day!  Hats off to the lefties, the southpaws, and to those 10% of society that have to live in a right-handed world.  This is National Left-Hander’s Day, established in 1992.

“On 13th August 1992 the Club launched International Left-Handers Day, an annual event where left-handers everywhere can celebrate their sinistrality and increase public awareness of the advantages and disadvantages of being left-handed. This event is now celebrated worldwide, and in the U.K. alone there have been more than 20 regional events to mark the day in recent years – including left-v-right sports matches, a left-handed tea party…and nationwide “Lefty Zones” where left-handers creativity, adaptability and sporting prowess were celebrated, whilst right-handers were encouraged to try out every day left-handed objects to see just how awkward it can feel using the wrong equipment!”1

Some interesting facts about left-handers and left-handedness include:

As you look in the Scriptures, some of the greatest warriors were lefthanded people.  Judges 20:15-16 says, “And the children of Benjamin were numbered at that time out of the cities twenty and six thousand men that drew sword, beside the inhabitants of Gibeah, which were numbered seven hundred chosen men.  (16)  Among all this people there were seven hundred chosen men lefthanded; every one could sling stones at an hair breadth, and not miss.”

Whether you are left handed or right handed, let’s give BOTH of our hands to the work of the Lord.  Just be careful if you are working next to that left handed person.  Their elbow is going to get in your way J