You are here: Home / Uncategorized / Living Under The Influence 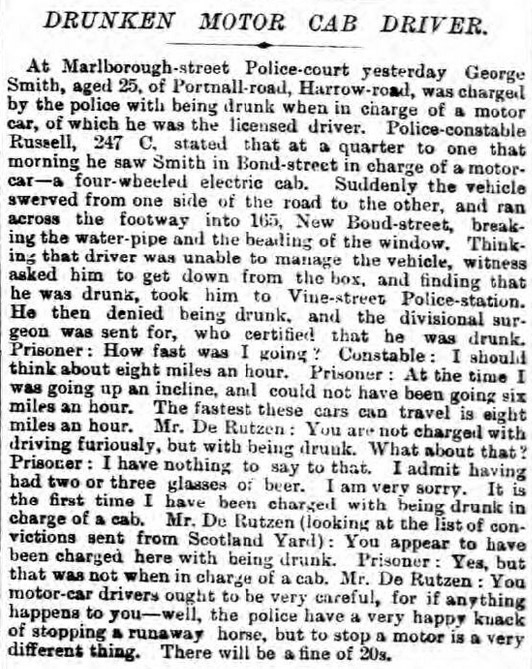 The London newspaper The Morning Post had an article in their September 11, 1897 edition about something that happened in the early morning hours of today’s date of that same year.  Cab driver George Smith made history.  At 12:45 a.m., he became the first person to ever be charged with a DUI.

Travelling at the blistering speed of 8 mph, a constable witnessed Smith swerve from one side of the road to the other, crashing his cab into a building at 165 New Bond Street, breaking a water line and the “heading of the window.”  He was taken to the police station where he claimed that he was not drunk.  The local surgeon was brought to the precinct and upon examining Smith, determined he was, in fact, drunk.

Smith finally admitted to having had two or three beers.  He received a fine of 20 shillings and was told ‘you motor-car drivers ought to be very careful, for if anything happens to you – well, the police have a very happy knack of stopping a runaway horse, but to stop a motor is a very different thing.’1

In 1936, Dr. Rolla Harger, the biochemistry and pharmacology department chairman of the Indiana University School of Medicine, developed the Drunkometer.  A former Indiana state police captain, Robert Borkenstein, began working with Harger to create a more accurate and usable model.  By 1953, they had made the Breathalyzer.  Through the years, this model has been upgraded and modified to make it portable and usable in the field.

Individuals who drink even small amounts are surrendering the control of their faculties to a foreign substance.  While the effects can be as simple as a relaxed mood, they can be as extreme as causing a death on the highway.

As Christians, we should never surrender to drinking or to anything else that may have a controlling effect on our minds and bodies.  The Apostle Paul addresses this.  Ephesians 5:18 says, “And be not drunk with wine, wherein is excess; but be filled with the Spirit.”  We are to be under the influence and control of the Holy Spirit.

Those who drink alcohol are affected by the alcohol.  Their mood 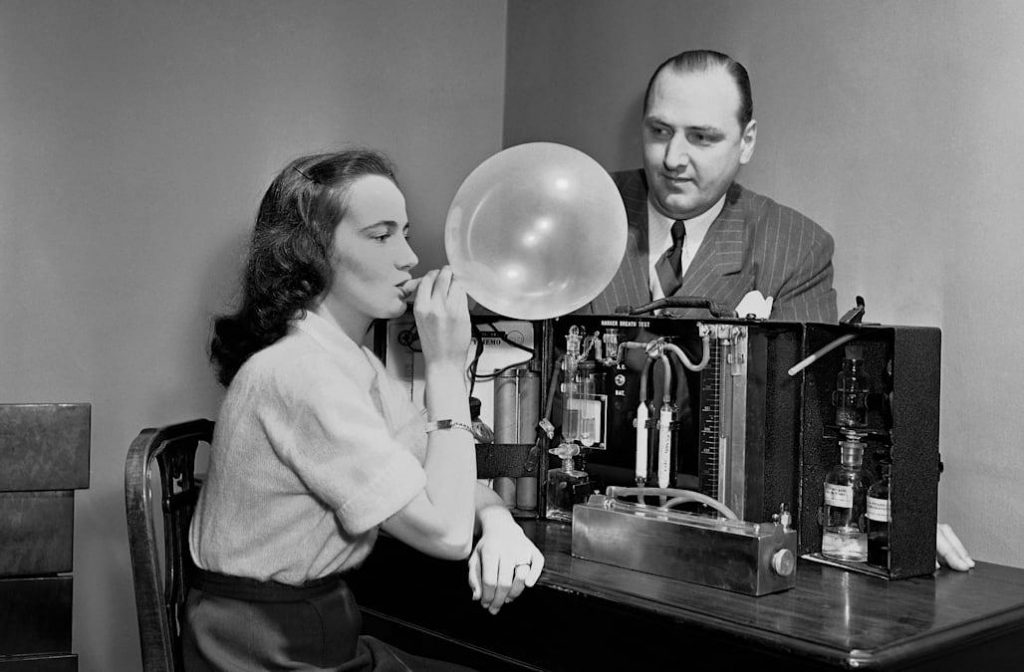 changes, either for the good or the bad.  They can become aggressive or the “life of the party” – but not in a good way.  Speech becomes slurred and mobility changes.  Reaction times are stunted as the alcohol takes control.

What are the effects of being under the influence of the Holy Spirit?  Ephesians 5:19-21 says, “Speaking to yourselves in psalms and hymns and spiritual songs, singing and making melody in your heart to the Lord;  (20)  Giving thanks always for all things unto God and the Father in the name of our Lord Jesus Christ;  (21)  Submitting yourselves one to another in the fear of God.”

Being under the influence of the Holy Spirit lifts the Christian to glorious heights of worship.  It affects our prayer life, causing us to speak with grateful hearts to the Lord.  And, the Spirit’s influence humbles us in order that we can serve each other.

The morning after a night on the town leaves a person with a headache, vomiting, a foggy memory, and regrets.  Living a life under the influence of the Holy Spirit leaves a person with joy, peace, excitement, and a hunger for more moments of His complete control.  It makes the Christian a better person.

There are never regrets when a Christian’s life is completely influenced and controlled by the Holy Spirit.