You are here: Home / Uncategorized / Rainbow 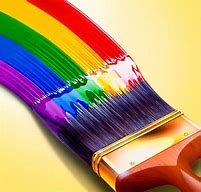 ROYGBIV.  Do you remember that from science classes while in school?  Red.  Orange.  Yellow.  Green.  Blue.  Indigo.  Violet.  The colors of the rainbow.

Today, we are finishing our colorful devotions by looking at one of the most majestic things God ever created.  Sadly, the true meaning and beauty of the rainbow has been hijacked since 1978 when Gilbert Baker, “designer, Vietnam War veteran and then-drag performer… was commissioned to create a flag by another gay icon, politician Harvey Milk, for San Francisco’s annual pride parade.”1

As he considered what to use to make an iconic statement, he thought about incorporating what had already been in use, a pink triangle.  This idea was quickly rejected because it was the symbol Nazis used to designate homosexuals.  Baker wanted to separate the “movement” away from the past and find something inspirational.

Choosing the rainbow, Baker saw each color as having significance.  Sex, life, healing, sunlight, nature, art, harmony, and spirit are all represented by the colors, a seeming hodge-podge of religion, naturism, and the New Age movement.  The gay community applauded the work accomplished by Gilbert and ever since have been waving their flag in pride.

In 2017, Ken Ham and Answers In Genesis issued a call for Christians to reclaim the rainbow.  “Sadly, people ignore 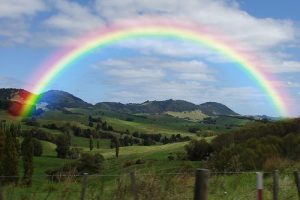 what God intended the rainbow to represent and proudly wave rainbow-colored flags in defiance of God’s command and design for marriage. Because of this, many Christians shy away from using the rainbow colors. But the rainbow was a symbol of God’s promises before the LGBTQ movement—and will continue to be after that movement has ended. As Christians, we need to take the rainbow back and teach our young people its true meaning.”2

The rainbow is a GOD thing, not a GAY thing.  Its beauty reminds us of the beauty of the promises of God.  He is a covenant-keeping God and the earth will never again be destroyed by flood waters.  However, the earth will be 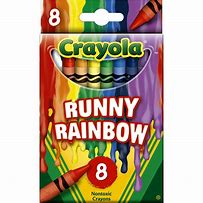 destroyed in the future with fire.

Even that is a beautiful promise to the Christian.  Before we inhabit the earth for time and eternity, the Lord is going to purge it and create all things news.  We are told in 2 Peter 3:12-13, “Looking for and hasting unto the coming of the day of God, wherein the heavens being on fire shall be dissolved, and the elements shall melt with fervent heat?  (13)  Nevertheless we, according to his promise, look for new heavens and a new earth, wherein dwelleth righteousness.”

Christians need to reclaim the rainbow.  It belongs to our Father and has great promise and meaning for all mankind.