You are here: Home / Uncategorized / Seven Brides For Seven Brothers

In 1954, Howard Keel and Jane Powell starred in the musical Seven Brides For Seven Brothers.  The story is set in the 1850 Oregon Territory, a place of “God fearin’ folk.”  One day, Adam Pontipee, a backwoodsman comes to town to do some shopping.  Winter is coming on and he needs supplies – and a bride.

He goes to the tavern to eat and this is where he first lays eyes on Milly.  She has fixed stew and there are several men that have come to eat.  Adam is not only impressed with her cooking but with her work ethic.  In a very short time, he proposes to her.  The proposal went like this, “I mean, back east we would’ve met in church. Six months later, I’d ask to walk you home. Next three years I’d take you out, but out here there’s no time. I’ve gotta get home before dark, and it’ll be another five months before I’m back down here with my grain. You wouldn’t ask me to wait five months for your pride’s sake, would ya?”

Though lacking romance, she accepts the proposal (but, she has to finish her chores first, she says) and before the day has ended, he is taking his new bride back to the cabin.

Upon arriving at the cabin, Milly finds out that six more brothers live in the cabin and they are as “back woodsy” as you can get.  She feels betrayed, believing she was only married to take care of them all.  However, she takes it upon herself to get her brothers spruced up, teaching some manner and etiquette, getting them in “courtin’ condition” just in time for a barn raising.

As they all go to the barn raising, the boys immediately fall for six young ladies.  The remainder of the movie is about 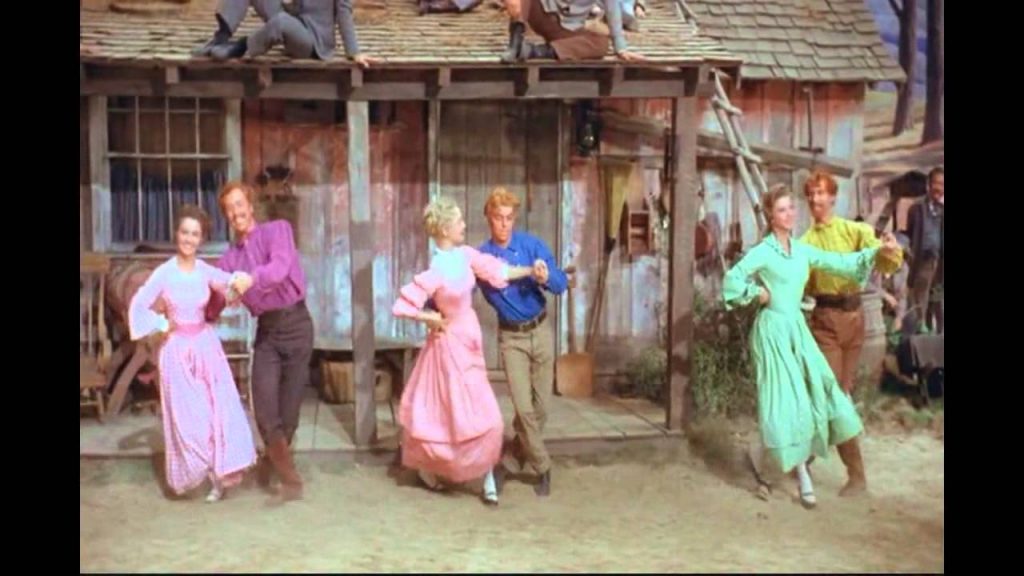 how the boys pine for the girls, sneak into town one cold night, kidnap the girls, and take them back to the cabin.  These backwoodsmen weren’t trying to be barbarians.  They thought this was romantic, following the advice written by Plutarch in an old book.

Only problem was, they forgot to get the preacher!  There’s no going back to town because on their escape, they purposefully caused an avalanche that blocked Echo Pass.  They would have to wait for the spring thaw before the pass would be open.

Once back at the cabin, Milly is furious with what the boys have done and with Adam’s defense of his brothers.  The girls all get to stay in the cabin while the boys are banished to spend the winter in the barn.  Over the course of the winter and into spring, love blossoms in the hearts of the girls for the boys.

When the pass opens, the townspeople are ready to storm the cabin to retrieve the girls.  The preacher goes along as well.

By the end of the movie, the six brothers have six brides and they all live happily ever after.  Interspersed throughout the movie are some amazing dance scenes with choreography that seems impossible to accomplish – but they do it with synchronized agility and precision!

While my movie synopsis may be a bit lengthy, you have to understand that this movie was intent on presenting the joys of love and marriage in their rightful order.  Also, the Biblical understanding of the roles of husbands and wives is upheld, going contrary to common culture.

Hebrews 13:4 says, “Marriage is honourable in all and the bed undefiled: but whoremongers and adulterers God will judge.”  Marriage was presented in the movie as a desirable institution, not for an expression of sexual desire but for the absolute joys of finding the love of your life.  And, propriety was presented as the honorable thing.  Unmarried couples do not sleep in the same house, fanning the flames of temptation.  Physical expressions of romance were discreet, modest, and avoided any hint of indecency.

The sexual relationship was defined within the context of marriage and anything apart from that would be sinful and unacceptable.  Do we see this portrayed in the majority of shows today?  Not hardly!  Consider another verse.

1 Peter 3:7 says, “Likewise, ye husbands, dwell with them according to knowledge, giving honour unto the wife, as unto the weaker vessel, and as being heirs together of the grace of life; that your prayers be not hindered.”  Throughout the movie, the guys were always trying to understand the girls.  Naturally, their confusion was a great source of comedy.  Still, they were trying.

And, the idea of the woman being the weaker vessel has infuriated feminists for a very long time.  None of the girls were presented in the movie as weaklings.  They were all intelligent, capable, hardworking women.  However, each woman embraced her femininity, allowing the men to be their “knight in shining armor” and rightful, Biblical head, a job which the men readily accepted.

Yes, they are different.  But, God’s Word and His truths never go out of style.  Just because the vast majority of society has discarded them doesn’t mean that they are no longer right!  Following God’s Word brings blessing and joy to our lives and our relationships, especially to our marriages.

Thank God for modern marriages modeled after the old-fashioned Word of God.