You are here: Home / Uncategorized / Whiffling 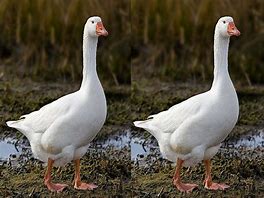 Have you ever seen a goose whiffle?  They don’t waffle or wobble, wiggle or waggle.  But they certainly know how to whiffle.

If you read yesterday’s devotional, you are probably thinking that I’m trying to compete with Dr. Seuss.  That’s not the case at all.  Geese really do whiffle.  And it is an amazing thing to see.

Geese flying overhead in their traditional V-formation is impressive on its own.  A goose that whiffles does something amazing and bizarre all at the same time.  While flying, they will flip over so that their legs are sticking up in the air and they will turn their necks 180 degrees, keeping their heads in the normal position.

Why in the world would geese do that?  Are they trying to show off?  Do they just get bored with flying normally and want to try some aerobatics?   While scientists aren’t 100% sure, the experts at Realtree have a suggestion.

“Whiffling is a term used in ornithology to describe the behavior whereby a bird rapidly descends with a zigzagging, side-slipping motion. Sometimes to whiffle, a bird flies briefly with its body turned upside down but with its neck and head twisted 180 degrees around in a normal position. The aerodynamics (that) usually give a bird lift during flying are thereby inverted, and the bird briefly plummets toward the ground before this is quickly reversed and the bird adopts a normal flying orientation. This erratic motion resembles a falling leaf and is used to avoid avian predators, or may be used by geese … to avoid a long, slow descent over an area where wildfowling is practiced.”1

Stop and think about something.  For man to fly, it took years of failed attempts, piles of blueprints, and thousands of hours pouring over mathematical equations.  It was years before man attempted flying upside down and then, the only real purpose was to do tricks in the air. 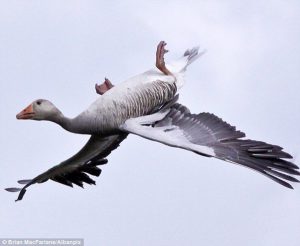 And, yet, geese have been doing this for a few thousand years, ever since they were made on the fifth day of creation.  Looking at that awesome creation, the Psalmist declared, “When I consider thy heavens, the work of thy fingers, the moon and the stars, which thou hast ordained;  (4)  What is man, that thou art mindful of him? and the son of man, that thou visitest him?  (5)  For thou hast made him a little lower than the angels, and hast crowned him with glory and honour.  (6)  Thou madest him to have dominion over the works of thy hands; thou hast put all things under his feet:  (7)  All sheep and oxen, yea, and the beasts of the field;  (8)  The fowl of the air, and the fish of the sea, and whatsoever passeth through the paths of the seas.  (9)  O LORD our Lord, how excellent is thy name in all the earth!” (Psalms 8:3-9)

How can anyone see something as graceful yet quirky as a goose flying upside down and not be in awe?  That animal had to be made by an Intelligent Creator, imprinted with instincts and designed for such feats.

Everywhere we look, we can see the Lord’s handiwork.  Take a moment today and just take some time to look out the window and take notice of some other unusual things the Lord has done that bring honor and glory to His name.